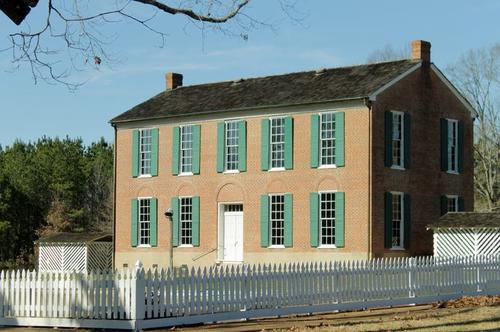 Eureka Masonic College, at Richland, Mississippi, lovingly called "The Little Red Schoolhouse" by Eastern Star members all over the world, is preserved by the Grand Chapter of Mississippi, O.E.S., in honor of the Architect and Master Builder of the Order, Dr. Robert Morris, who conceived the idea of the Order while serving as Principal of the school. Official records show that the cornerstone of the building was laid early in October of 1847. It was described as "a handsome brick edifice, 60 by 30 feet, and two stories high."

The original name was Richland Literary Institute but on February 7, 1848, the college was chartered under the name of Eureka Masonic College with the power to confer literary and honorary degrees. Robert Morris was secured as the Principal of this new Masonic college.

The building was used during the Civil War to house Company C, 15th Mississippi Infantry, one of the first companies organized in the state. The regiment was noted for its heroic service throughout the war, serving in the battles of Fishing Creek, Shiloh, Franklin, and the Atlantic Campaign.

Early in 1975 the first superintendent moved into a brick home, built across Highway 17 from the Schoolhouse, obtained under the same legislative act which allowed the original purchase in 1968.

The 1979 report of the Board of Trustees states that a 21-year restoration of the school building begun in 1958 had been completed on December 10, 1979.

Since securing possession of the schoolhouse, the members of the Grand Chapter of Mississippi have spent vast amounts of money, time, and effort in a long-range program of restoration. A fence enclosed the property, and rest rooms of red brick have been built. A pavilion, erected in 1962, shelters crowds assembling there in August of each year for a Festal Day picnic. This picnic attracts hundreds of Eastern Star families from Mississippi as well as neighboring states. Each year during the Grand Chapter session, a tour to the Schoolhouse is conducted by the Board of Trustees, providing an opportunity for out-of-state guests to share the pride which Mississippi members feel in the preservation of this shrine.

The Little Red Schoolhouse may be reached by exit No. 144 or exit No. 146 from I-55, fifty miles north of Jackson, Mississippi. The building is open daily from 9:30 a.m. to 3:30 p.m. Souvenirs are on sale, no admission is charged.